Many Nights. Many Worlds. The Myriadu. 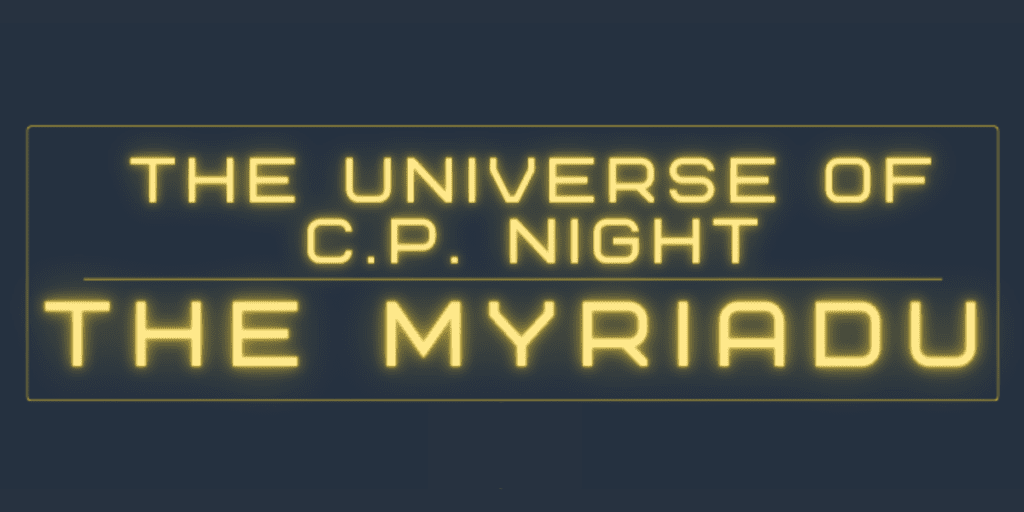 So what is the Myriadu you ask? It’s only the universe. That’s all. Well, the universe that all my stories take place in (some exceptions). It’s a really cool place that allows for sci-fi, science fantasy and even pure fantasy stories to happen. After all, our real-life universe is a mysterious place, filled with things we can’t yet explain. Why can’t my fictional one be the same, or even more mysterious?

I’m assuming you won’t argue with me there. But you might be wondering where I got the name.

It came to me in a dream…no it didn’t. It’s based on one of my favorite words: myriad. I’ve loved that word ever since reading All the Myriad Ways by Larry Niven when I was a teenager. I had no idea what the word meant, but I loved Niven’s universe, so I read the book anyway. It was a collection of his short stories that included some very memorable tales. One that still haunts me to this day is “Inconstant Moon”, which was made into an episode of The Outer Limits in the 1990s. If you get the chance, read it. Another story that scarred me, due to the tender age I read it, is “Man of Steel, Woman of Kleenex”. It’s a detailed discussion of how the intimate relationship between Superman and Lois Lane might actually work given, you know, his superhuman strength. Spoiler: It never ends well for Lois.

Getting back to the Myriadu…

So myriad means a great number, countless, or so many it isn’t even worth counting. I love it because it is one word that conveys so much. It’s like looking up at a night sky and seeing the stars and wondering how many there are. You can try to count them, but I guarantee you’ll end up agreeing there is a myriad of stars.

I couldn’t just use the word as is though. So I played around with it until I settled on adding the u at the end. It sounds cool (pronounced miri-ahh-du) and feels mysterious and all-encompassing (because, you know, myriad means a great number of things).

But what is in it?

Getting down to the details, the Myriadu actually has a firm timeline. I originally wanted to write only far-future stories so it begins when humans first leave the solar system and colonize another world. That first step was to the super earth Proxima Centauri b and represents year zero in the Myriadu, or 0 M. From there humans establish a galactic presence, governance, and culture. And then they lose it all. The cycle repeats three times until the Core Galactic Empire is formed in 2132 M. The Butcher of Porwia takes place in 3092 M. I guess you can say that the Core is the “current” time in the Myriadu as that’s as far as my stories have gotten. It will continue forward (and perhaps backward) as I write more stories.

M obviously refers to the Myriadu, but how long is an M? Time references are always a tricky subject in stories that span planets or different solar systems. Come to think of it, not everyone on Earth uses the same calendar! So the measurement of Ms is completely arbitrary in the sense I am making it up. I’ve been thinking of Ms in terms of one Earth year, but it may also be slightly longer. In the end, it doesn’t matter too much since it is just a reference. For example, I haven’t defined how many Ms, or years, pass between our now and when humans head off for Proxima Centauri b. The Myriadu is currently 3092 years old, but that could be 5, 6, or even 10 thousand years into our future.

After all that description, it’s all probably as clear as mud. So I’ve made a visual of the Myriadu timeline. What do you think?